I started off my Steppenwolf Theatre season with a star-powered production featuring ensemble member Joan Allen in her first appearance here in over two decades. The Wheel, by Zinnie Harris, is the slightly surreal tale of a peasant woman caught up in war as she attempts to reunite an abandoned girl with her exiled father. The story begins during the Spanish Civil War and over the course of nearly two hours, morphs from one conflict to another, taking Allen’s Beatriz (now saddled with three children to protect) from the trenches to WWI through to the Iraq War. 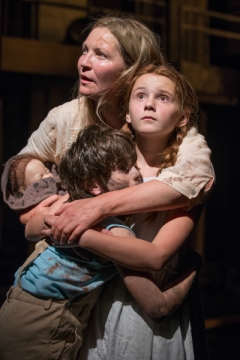 While it would be difficult for me to explain exactly what the play is about (other than to say, living through war is hell), any frustration I might have felt about the ambiguous narrative was kept at bay by Allen’s riveting performance. (She’s on stage nearly the entire time.) Acting across the board is top-notch, combined with a set and staging that is nothing short of incredible. Set pieces come in from every direction, and sound and lighting create eerie and arresting images of war. By the end, the stage has been transformed from a relatively simple and bright Spanish countryside, to the murky chaos of war. The stage crew certainly has its work cut out of it every night, having to clean up the mess and reset for the next show.

I’d recommend The Wheel as a thrilling evening of theater that will give you lots to discuss over drinks after the show. Performances continue at Steppenwolf through November 10.