JD and I continued our tradition of voting together. I let her push the buttons on the touchscreen and afterward we both got an "I Voted" sticker that we wear with pride for the rest of the day. She remembered the drill this time and marched in ready to collect her sticker. Fortunately, there wasn't much of a wait to use the machine. Unfortunately, there wasn't much time to snap a feet foto, so this is the best I could do.

Our choices here in Illinois for governor and Senate were pathetic, a choice between Dumb and Dumber and Crooked and Crookeder. Bringing a three-year-old to the polling place made an otherwise depressing exercise in democracy much more enjoyable.

This was the stamp of approval I received Saturday while standing in line waiting to get the H1N1 flu shot. Sometimes it pays to have asthma.

I get a seasonal flu shot every year so it was a no-brainer to get an H1N1 shot, it was just a matter of when and where. None of my doctors’ offices are getting the vaccine so when I heard the city had gotten 5,000 doses for a free clinic this past weekend, I decided to go for it and wait in line first thing on Saturday. I’d heard stories about clinics in Chicago where people had waited two and as long as five hours to get a shot so I was mentally prepared to spend my entire Saturday waiting in line, hoping to be one of the lucky 5,000. (There’s no telling when the city will receive more vaccines and since I’m flying over Thanksgiving, I figured the sooner the better to arm myself before passing through germ central (O’Hare airport) and getting on a flying petri dish. Plus, I know someone who’s had swine flu and it was no picnic.)

Thankfully, on Saturday the weather decided to grant us a belated Indian Summer with warmer temperatures and plenty of sunshine. Temperatures in the 60s (where the weekend before it had been in the 30s and 40s) and a line filled with families and their small children made for an almost festival atmosphere. (Hint: all you sidewalk musicians busking at the Farmer’s Market? You should have been entertaining in the high school parking lot. You would have had a grateful (and captive) audience.) Considering we were all waiting to be infected with the flu, the atmosphere was light-hearted and friendly.

The 2-1/2 hours I waited in line passed quickly. I brought a book to read but never cracked it open. Instead, I chatted with a friendly couple waiting with their seven-month-old son. I saw a few old friends and we killed time catching up and there was a handful of friendly faces from JD’s school and Wiggleworms.

All in all, it was relatively painless–pun intended. I learned that the earliest folks in line had been there since 6 a.m.; I was out by 11, having only had to wait since 8:30 so I was glad for that. The process from door-to-door (checking IDs, stamping the hand for those okay’d to get the shot, filling out a simple form, getting the jab, and then outtake) took less than thirty minutes. Afterward, I spent a lovely hour walking home on an absolutely gorgeous fall day. 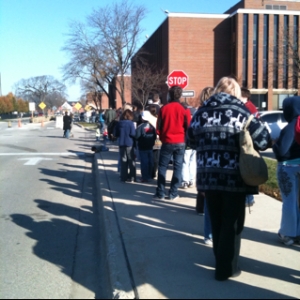 Flickr’s blog post today features photos from the Station Fire in California and it’s definitely worth checking out. Be sure to watch the video. There are more photos here and they’re stunning as well.

This has got to be the most uncomfortable beer garden ever.

Update: Of course, about twenty minutes after I left work, the news broke about the indictment. You can read the press release outlining the counts of “pervasive fraud” on the U.S. Dept of Justice website (look for the press release link in the upper right hand corner) or just skip to the last page to see the maximum penalties for each of the 19 counts, 16 of which were filed against Blagojevich. 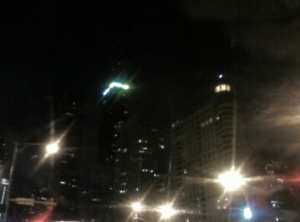 First of all, apologies for the atrocious photo above, snapped with my lousy camera phone while we were stopped at a traffic light on Lake Shore Drive.

That hulking building with the band of glowing lights on top is the Hancock Building, decked out in Olympic splendor. Many of the more prominent buildings in Chicago change their decorative lighting for holidays (orange for Halloween, red-white-and-blue for Independence Day, Green for St. Patrick’s day) or special events. In this case, the Hancock and Wrigley Building are accented with the colors of the Olympic rings.

In case you haven’t heard, Mayor Daley and a faction of civic leaders and Olympic boosters are falling all over themselves in an attempt to woo the International Olympic Committee to choose Chicago as the summer venue for the 2016 games. As if Chicago didn’t have enough money troubles. A few weeks ago, the fact that a neighborhood slotted to lose parkland to an Olympic stadium had jumped to the front of the pot hole-filling queue (in preparation for the IOC’s visit) shouldn’t have shocked anyone. That’s just the beginning of it, should Chicago win the games.

The IOC arrives tomorrow for a six day visit to make their final evaluation. The Buckingham Fountain repairs, which have been going on all winter, have magically finished just in time for the visit and the scaffolding has all come down. Olympic banners line Grant Park and the Michigan Avenue Bridge, and the Smurfit-Stone building has a pair of 2016s outlined in lights in its diamond roof. For the next six days, everything in Chicago will halt and focus on the committee’s every move.

If you couldn’t tell from my tone, I’m no fan of having the Olympics come to Chicago. I think it will be a financial disaster for Chicago taxpayers. Two words sum it up: Illinois politics. Two more words come to mind: Greed and ego.

At the January 28 Park District board meeting, the commissioners wenteven further, unanimously adopting new leasing rules that give superintendent Tim Mitchell a free hand to let the Olympics use any of the parks without board approval or public hearings. This will let Mitchell and the bid committee shift venues and construction schedules without notifying the public.

Scary. Like I said, it’s just the beginning. Personally, I hope the hype ends in October when the IOC chooses any other city over Chicago. 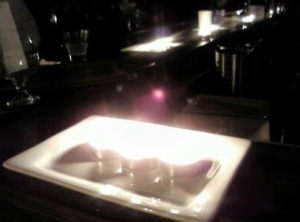 I happened to be out to dinner at Uncommon Ground during Earth Hour and was glad to see the restaurant chose to participate. Though I wasn’t really surprised. UC is a pretty progressive restaurant. They focus on local ingredients, have a green garden on their rooftop, and are in the process of stocking their bar with only non-imported liquors, beer and wine. Last but not least, the food is really great. Comfort food with a tasty twist.

On the way home, I took a spin over to Northwestern’s campus for a good view of a darkened downtown Chicago. Here are some cool pix of Earth Hour around the globe.

This morning on NPR’s Morning Edition, there was a story about a giant farm fair being held in Paris to attract city folk to work on the farm. Apparently, smaller and family-run farms are having trouble attracting people to work the land, so the farming industry has launched a campaign to revamp the image. One thing mentioned in the story, was some farmers are concerned that the majority of folks who apply will be “neo-rurals,” people “who romanticize farming” and are unaccustomed to the realities of hard, manual labor.

My first thought was this is a great premise for a movie. My second thought was Sandra Bullock! Can’t you just see it? Manhattan urbanista Sandra Bullock is vacationing in Paris. Maybe she gets dumped in the middle of her trip by her wealthy, businessman boyfriend. She stumbles into a farm job fair, thinking it’s a farmers market or some such quaint local thingy and she signs on to work a rural farm thinking she’s signing up for a touristy excursion to the picturesque countryside.

Wow is she in for a shock! Private Benjamin down on the farm. Because while she loves goat cheese, she didn’t think it actually came, you know, from goats!? Pratfalls in the pig pen, hijinks on a runaway tractor, no hair dryer or morning Starbucks! And what’s with everyone talking French all the time? Of course the guy who owns the farm would be played by some hunky French actor, and she wins him over (along with the gruff locals) by the time the credits role.

Formula all the way. Open it over Valentine’s weekend or opposite the big smash-up crash-up of the summer season and it will make millions.

Loved the moment of swearing in.
Hated the hype.

Loved the musical performance by Yo-Yo Ma and Itzhak Perlman (even if it was arranged by John Williams.)
Hated Aretha Franklin’s version of “My Country ‘Tis of Thee.”

Loved the benediction by Rev. Joseph Lower.
Hated the invocation by Rick Warren.

Loved Obama’s delivery (though not necessarily the speech) but it ended powerfully.
Hated the poem. Boring and poorly read.

Favorite moment: Watching the helicopter lift up and fly George Bush off and away.